Kauai has warm climate but it is the wettest of the Hawaiian islands, with showers usually in the mornings and afternoons. Thus, it is always a dilemma whether to go on a vacation some place sunnier where I can get a tan or explore the unpredicatable lush rain forests and sceneries, its exotic plants, unique fruits and animals in Kauai. 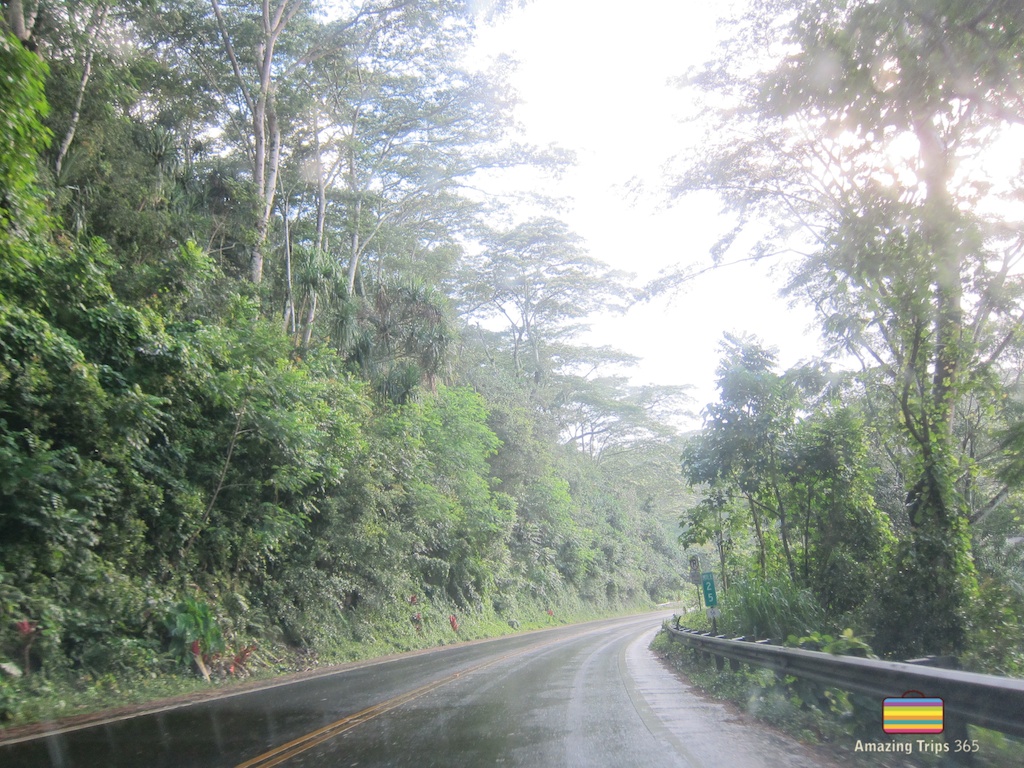 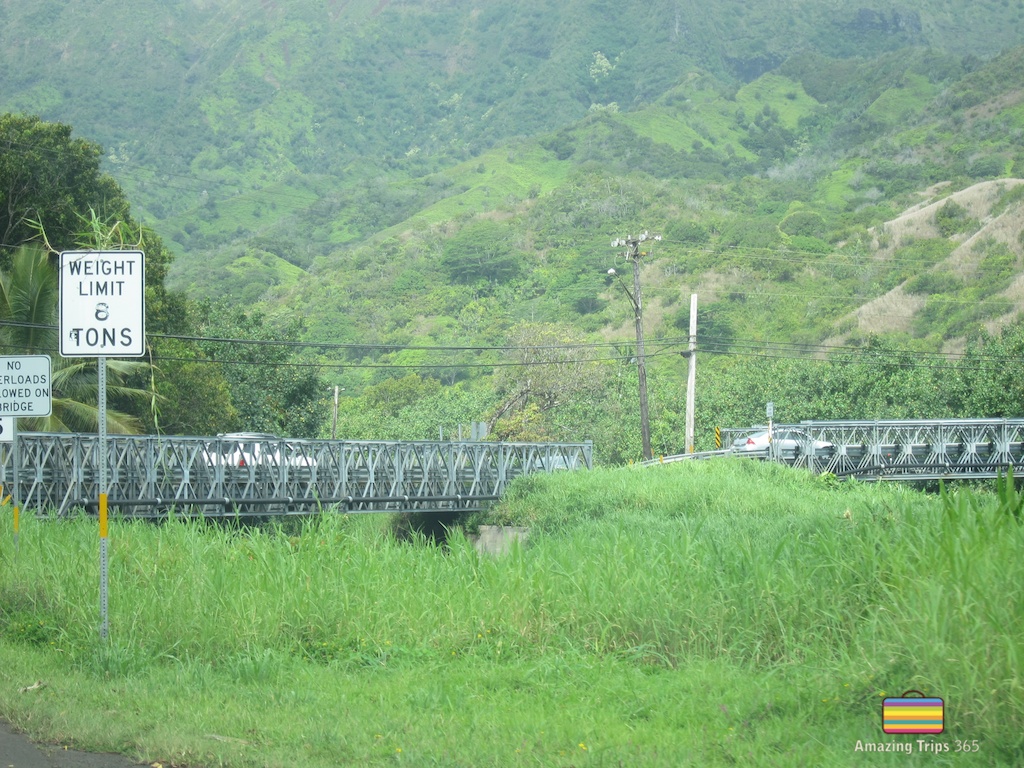 Princeville, north of the island, is secluded and quaint. The Westin hotel shares the beach and the facilities at St. Regis, just a short shuttle ride. Our corner oceanview room and balcony was beautiful as well as the infinity pool and lounge chairs, bbq area and concierge at the Westin. The beaches in this north part of the island like Tunnels, Anini and Haena are prettier than anywhere else.  Ke’e beach at the end of the road also has turquoise water when viewed from the Kalalau trail on your hike up the Napali cliffs. It is a good snorkeling spot because this “kiddie pool” or “bay” gets crowded with families and children. Good luck looking for parking though. The spaces are very limited and in my opinion, rather than wasting 30 minutes or more, I would stop by Wet and Dry Caves for a few minutes then head over to Haena State Park. The waves, white sand and turquoise water here is a better payoff. There is plenty of parking and right across from the the lot, you can pretend to be Tarzan and Jane in the aged tree branches hanging down from the mountain cliffs. 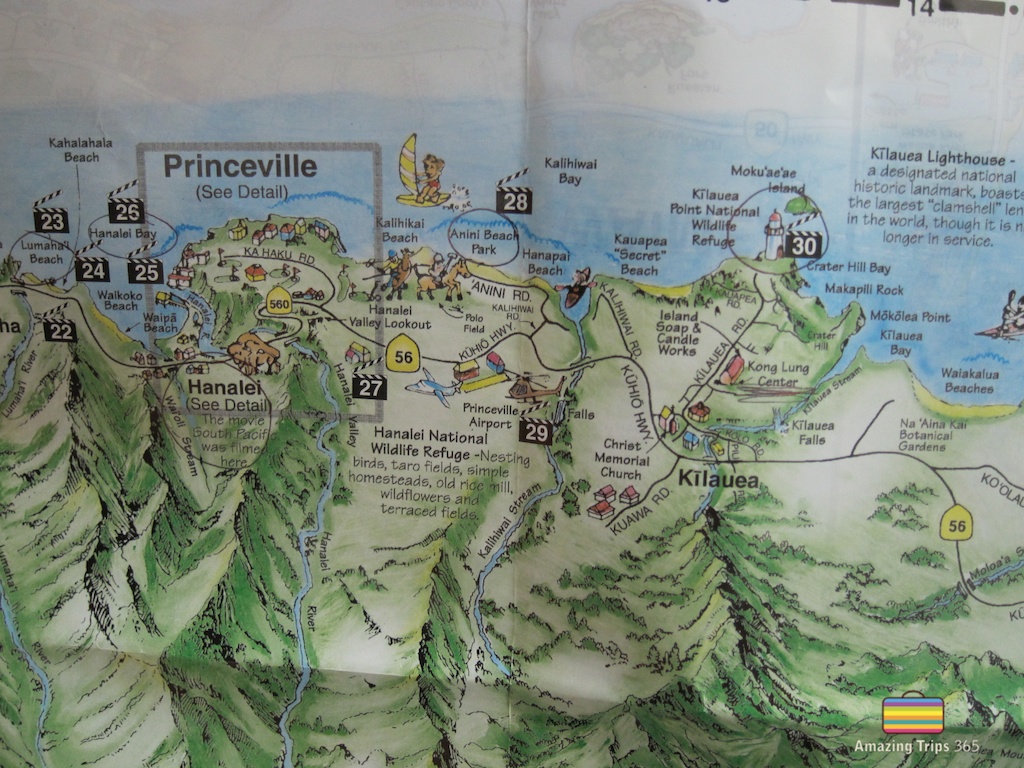 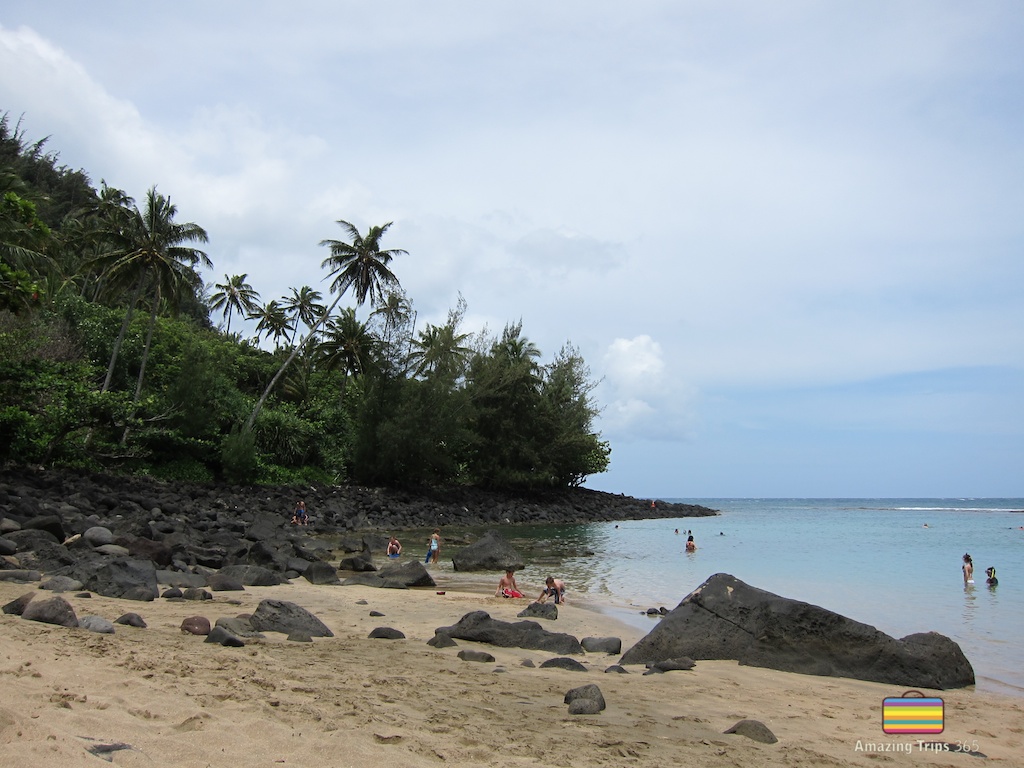 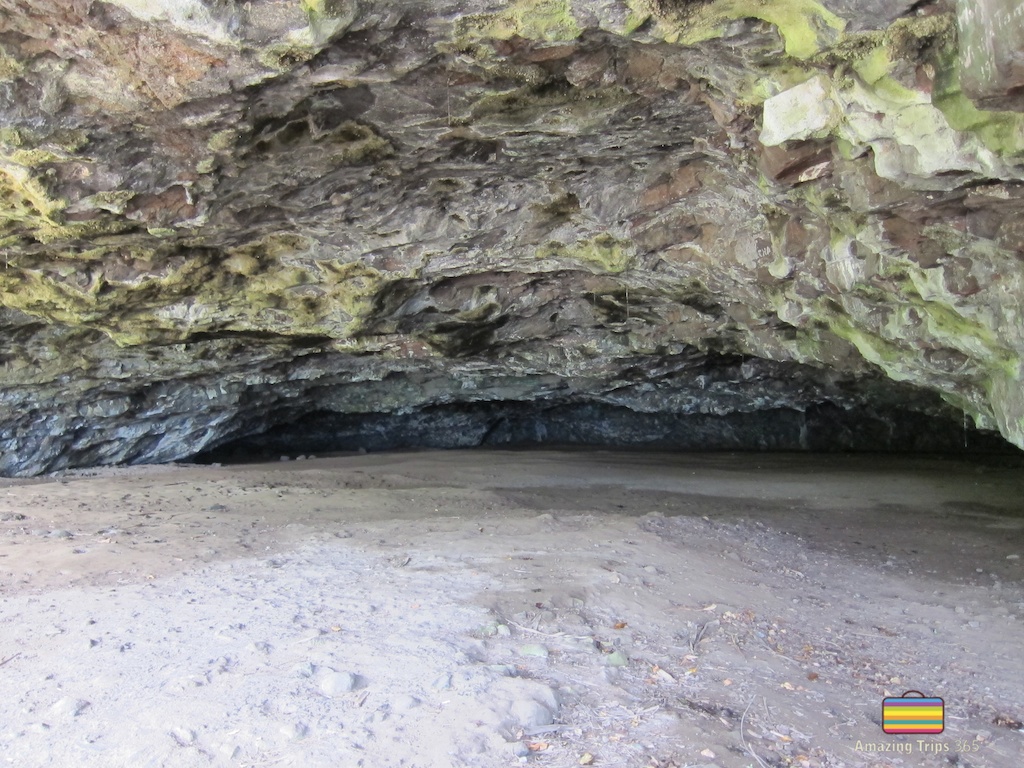 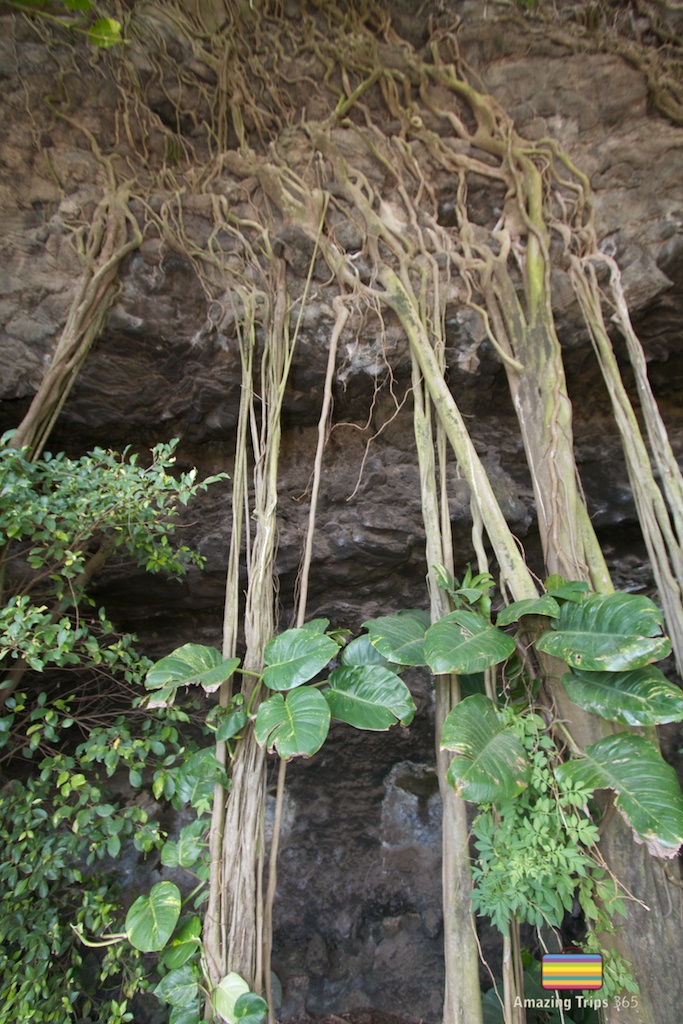 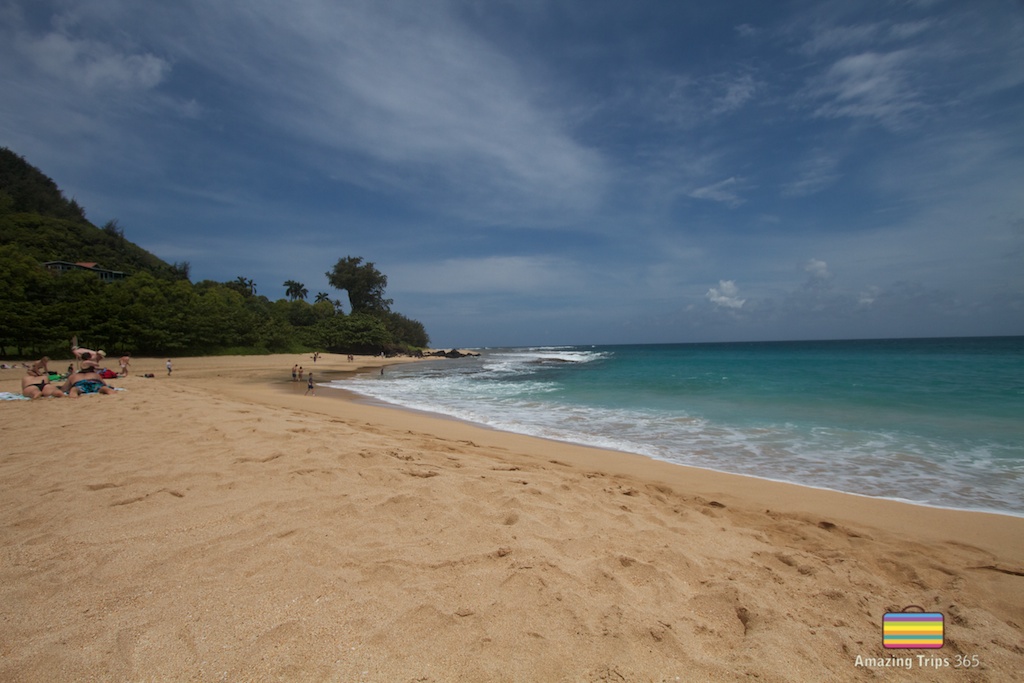 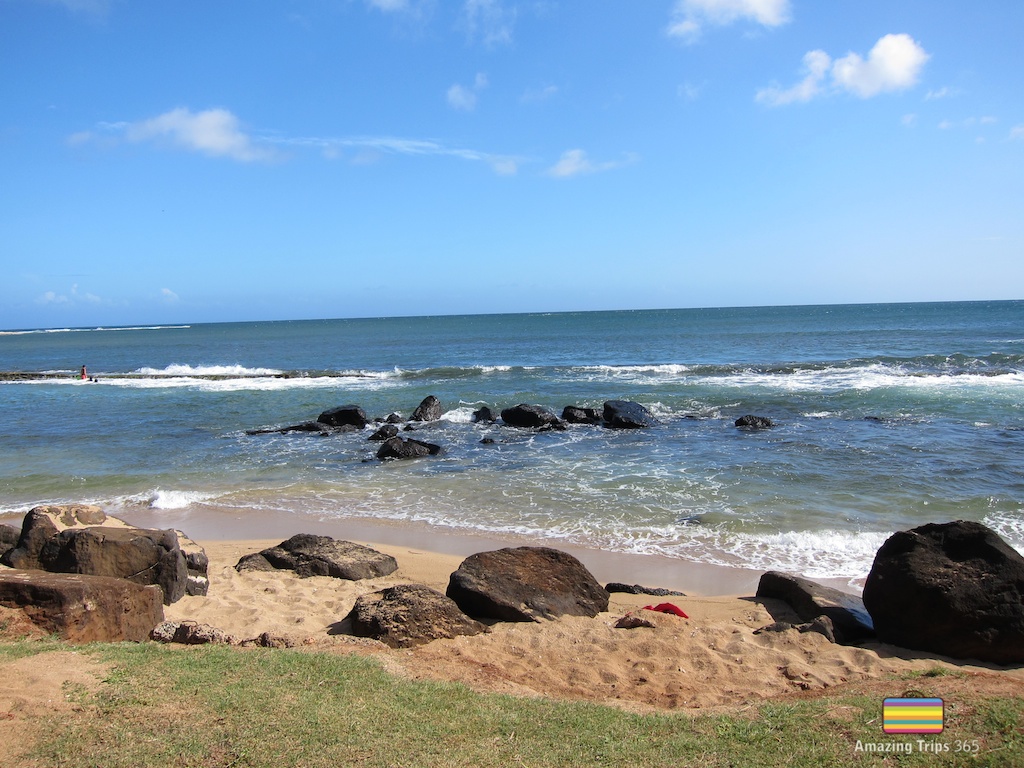 Kilauea lighthouse is absolutely peaceful and breathtaking! You can watch the different species of floras and faunas and take a few good photos for a souvenir. Spouting Horn in the south side of the island is also picturesque. The waves force air out of an opening in a lava tube, producing sounds while salt spray is forced out of another opening close by. Ladies, bargain for pearls at the jewelry vendors. You can really get a good deal since there is a lot of competition out here. Then there are the falls where Jurassic Park was filmed…Wailua and Opaeka’a Falls in Wailua. 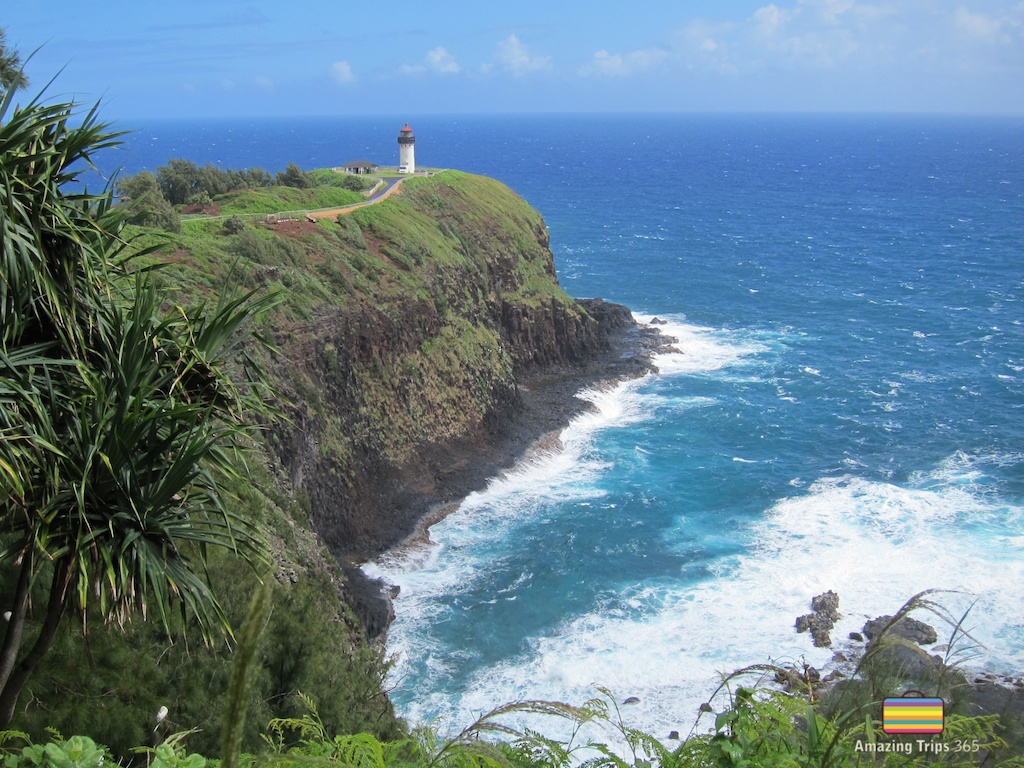 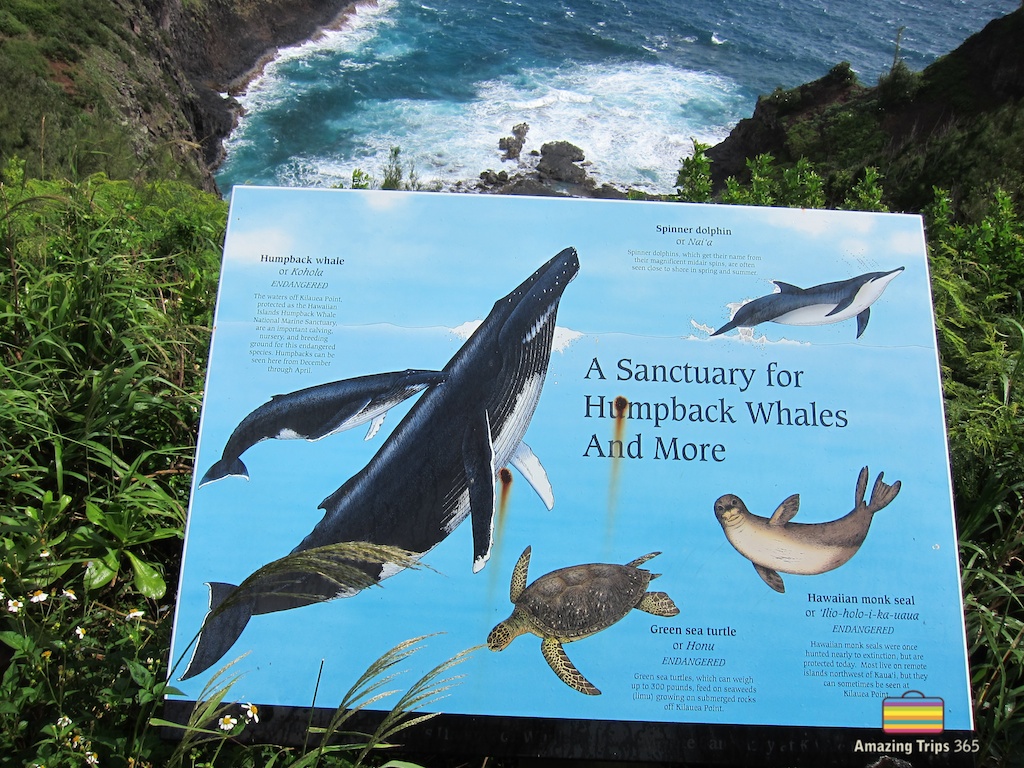 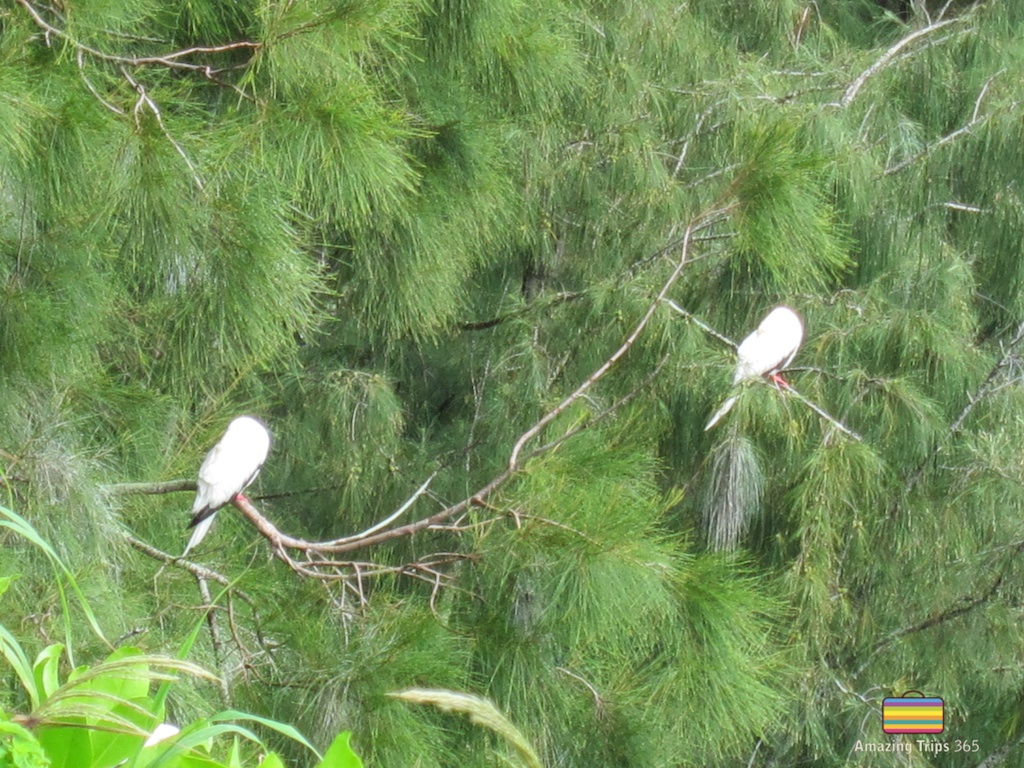 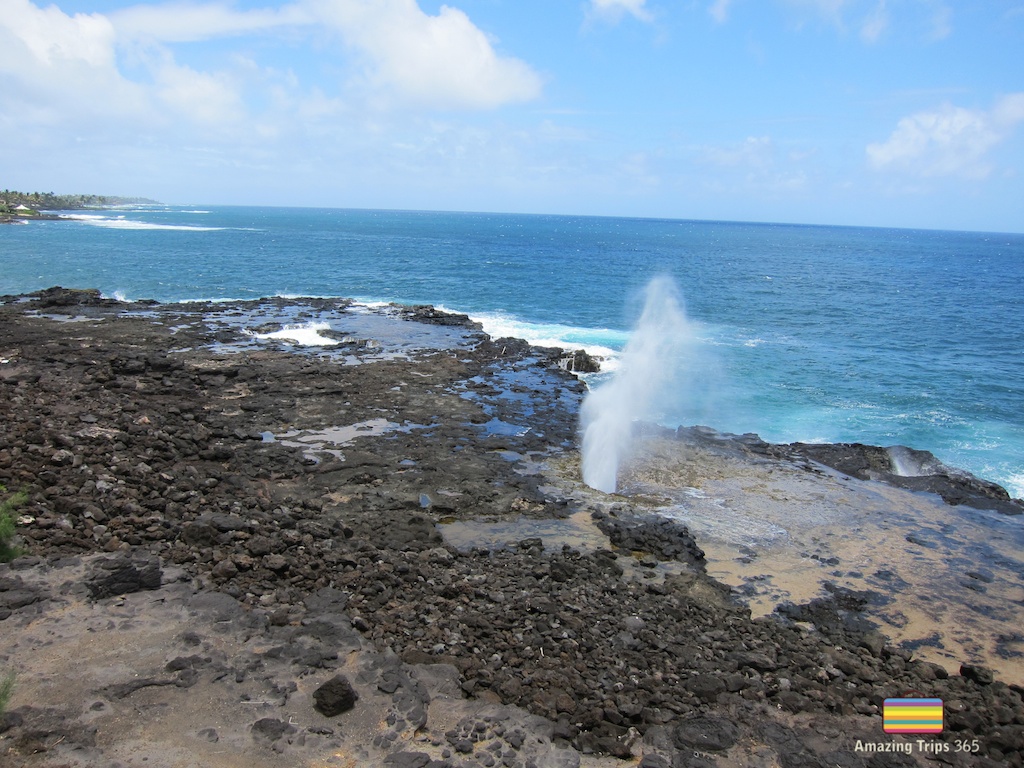 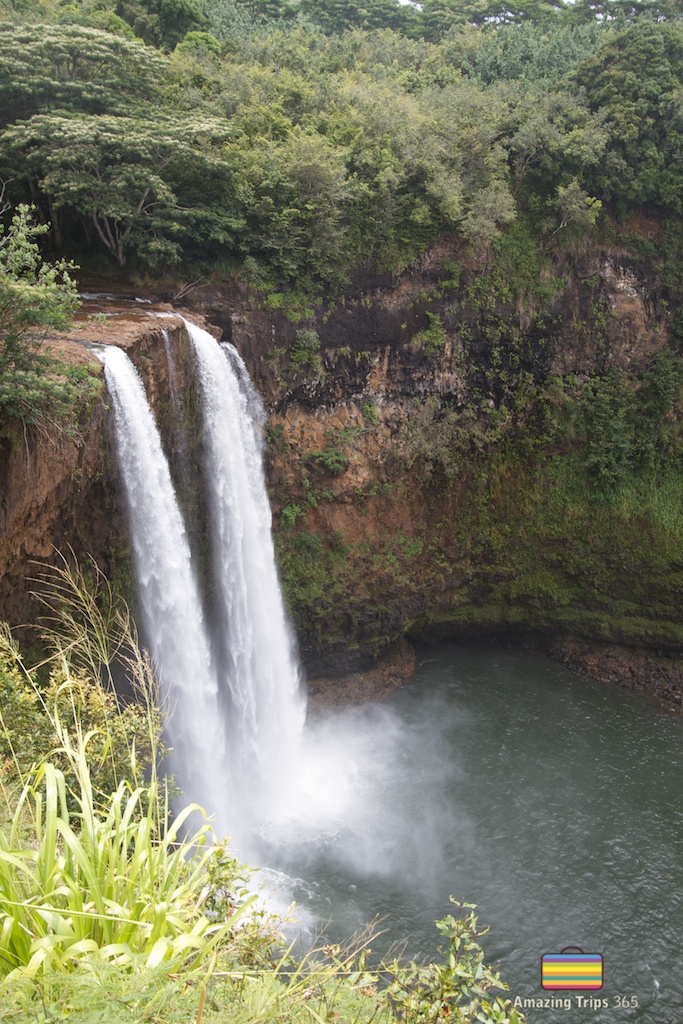 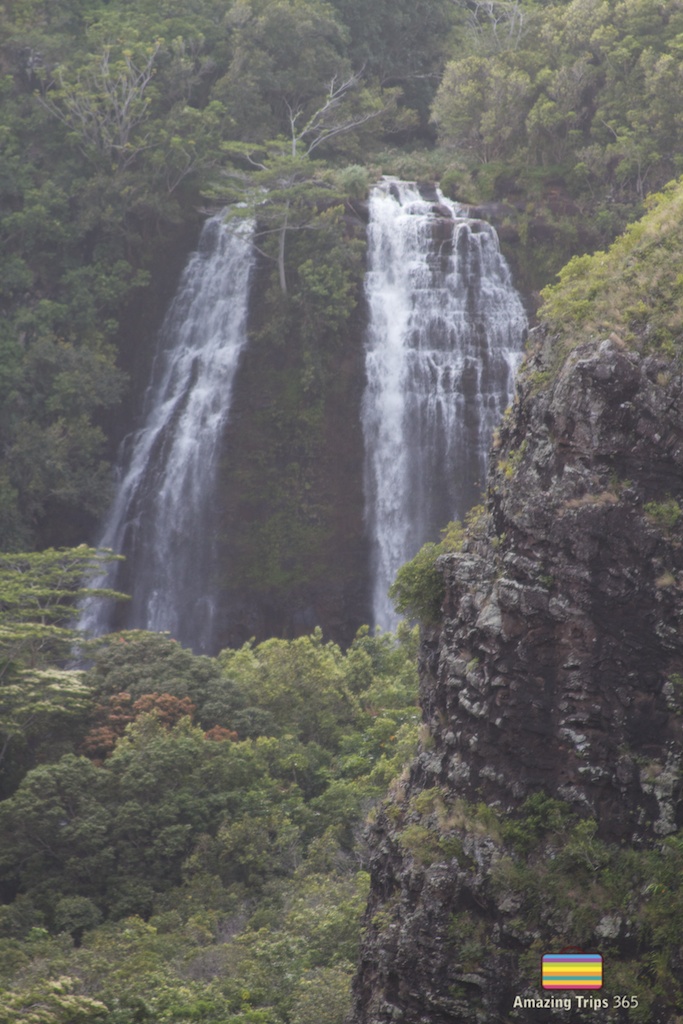 Every time I go to Kauai, I like to visit the farmer’s market held in different neighborhoods. It is so exciting to buy various local organic produce that I have never seen in the mainland. The key here is to buy one of each for a dollar or two and sample them. My favorite is the eggfruit, but it is hard to find them since they are grown only by few local growers. The fruit is dark yellow and a size of a large avocado. When you peel the skin, it is just like a hard-boiled egg yoke, sweet but without the stink. Other fruits such as a mountain apple tastes like a cross-breed of an apple and a pear.  Kauai cherries are sour and bitter though they are rich in Vitamin C.  Passionfruit is deliciously sweet and avocados are huge, a size of small football. You have to try Hawaiian papayas, coconuts and pineapples, too, although Dole pineapples are not as sweet as Maui Gold from the island of Maui.

Smith’s Tropical Paradise offers a Luau on certain evenings during the week. They are one of the most reputable companies in the island and are convenient with a pickup/dropoff service from designated hotels nearby. Don’t miss a golf cart ride through acres of botanical gardens and lagoons before dinner. You will pass through a rain forest, Polynesian, Japanese, Filipino village and encounter many exotic birds.

The number of fast food chains such as Mcdonalds, Subway and Burger King are limited on the island, especially in Princeville. However, stock up on a few meals at Foodmart, a local grocery store. A variety of freshly-made poke salads, salmon, tuna, shrimp and octopus are available. If you get a fill of seafood, go to Hukilau Lanai in Kapaa. It’s unbelievable but the best prime rib I have ever had was at this restaurant! The meat was so tender and juicy, I almost swallowed the whole thing.  Substitute the potato salad for local exotic vegetables for extra $2. It is worth it.  My meal was phenomenal and I was on Cloud 9 the whole evening. Most of the restaurants on the island will be in Kapaa and Lihue, or “Downtown.” Eggbert’s offer local dishes such as LocoMoco, fried egg, hamburger pattie and gravy over rice. But you better get there early as this restaurant only opens for breakfast and brunch. Poipu in the south side also has many resorts and restaurants. Though a bit too touristy for me, it can be perfect for those who want to be in the happening spot. Wherever you go, keep an eye on the shrimp truck for a delicious snack or meal of garlic shrimp.  For dessert, treat yourself to a decadent banana rum over ice and club soda. It is phenomenal! 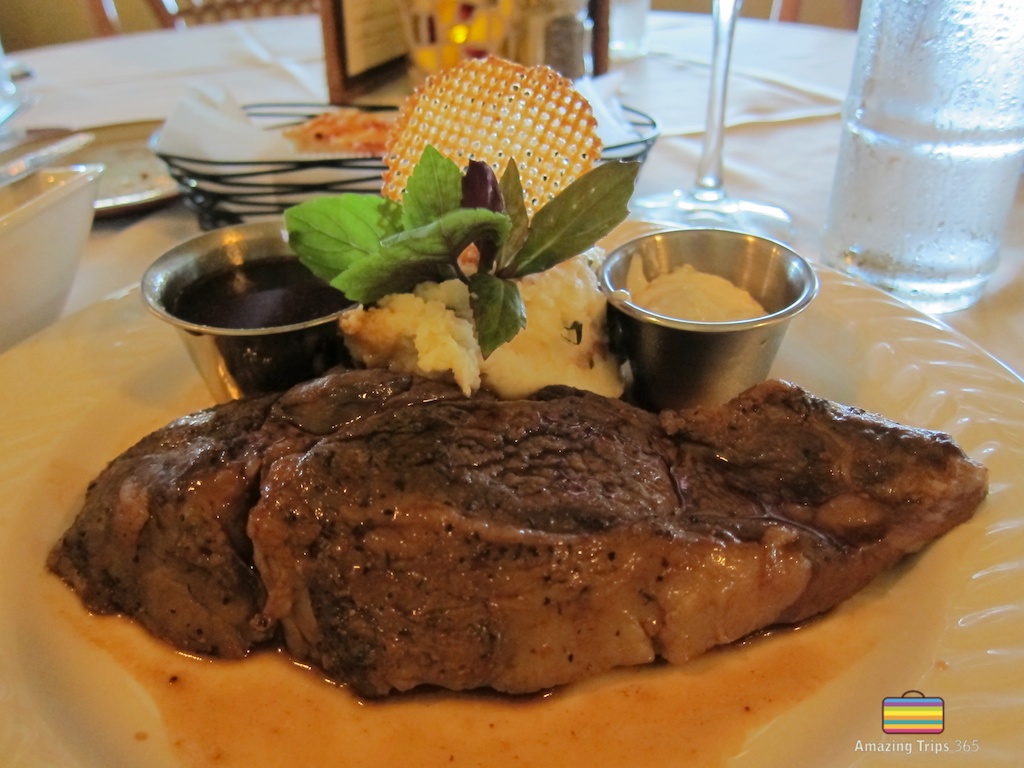 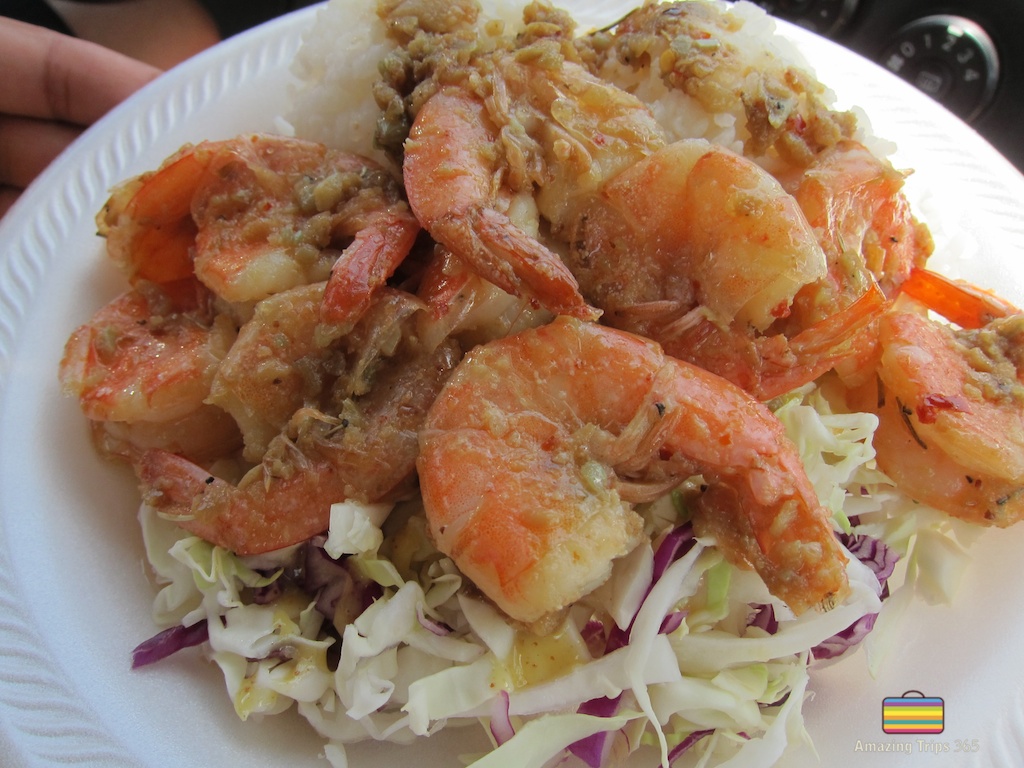 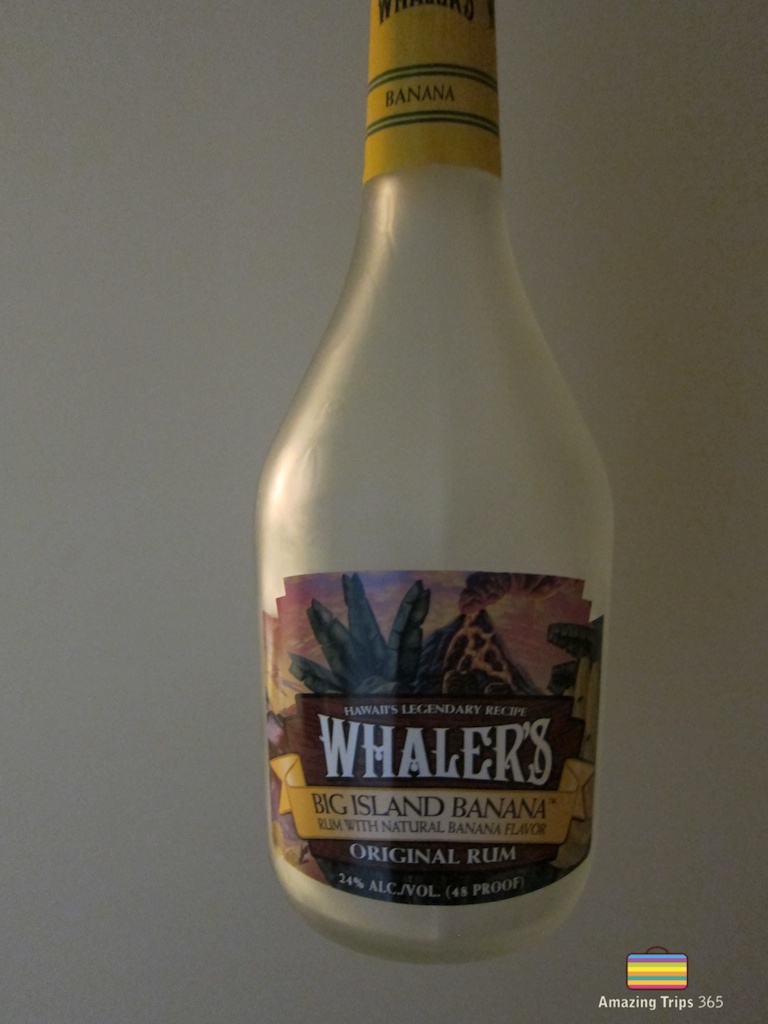 More than 50% of Kauai cannot be seen by car and roads are blocked off. Therefore you must either view the island in the air or via small boats that go inside the sea caves. We took a 50-min Rainbow Helicopter ride to circle the whole island. Most of the island was lush green like a jungle or a rainforest with very tall waterfalls. Waimea canyon or “the Grand Canyon” of the west is definitely an experience!  Jewel tones of red corals sparkle at sunset. If you cannot get to tour the island by air or sea, drive down to Koloa, Hanapepe and Waimea then go north on Waimea Canyon Drive to the state park, stopping at major scenic lookouts. Note the red cliffs in the Hanapepe Valley. On another note, if you need to keep yourself busy while driving, be sure to count the number of roosters on the road! They are like street dogs in Mexico and they crow all throughout the day! Also pay attention off to the left on the way up to Kapaa, as Sleeping Giant outlines a resemblance of a reclining giant. 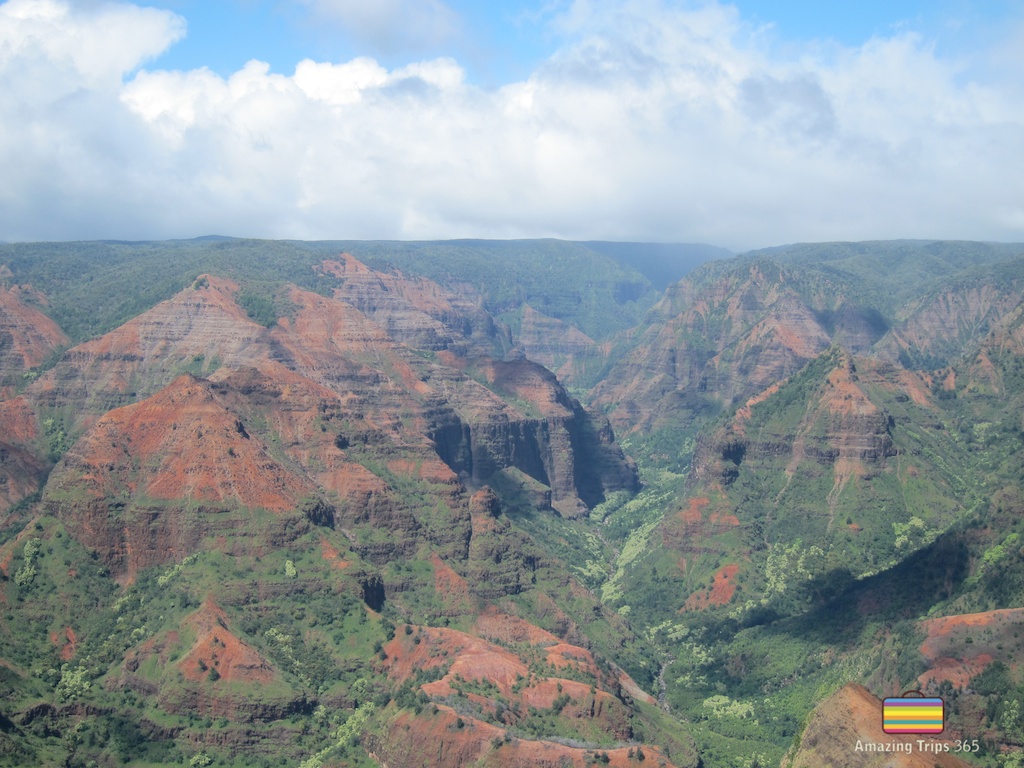 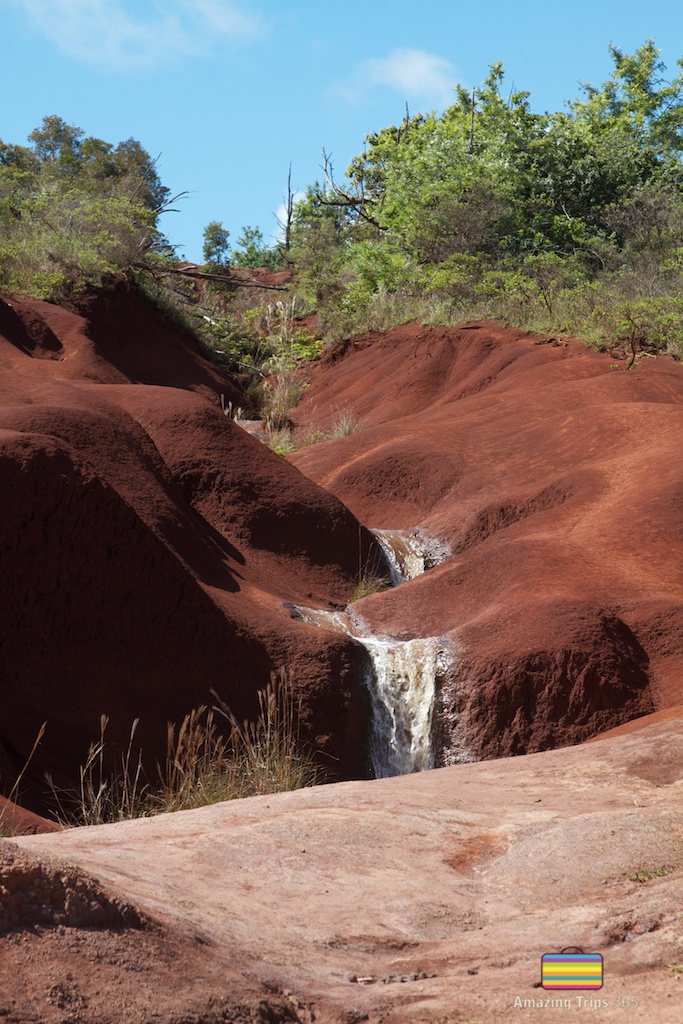 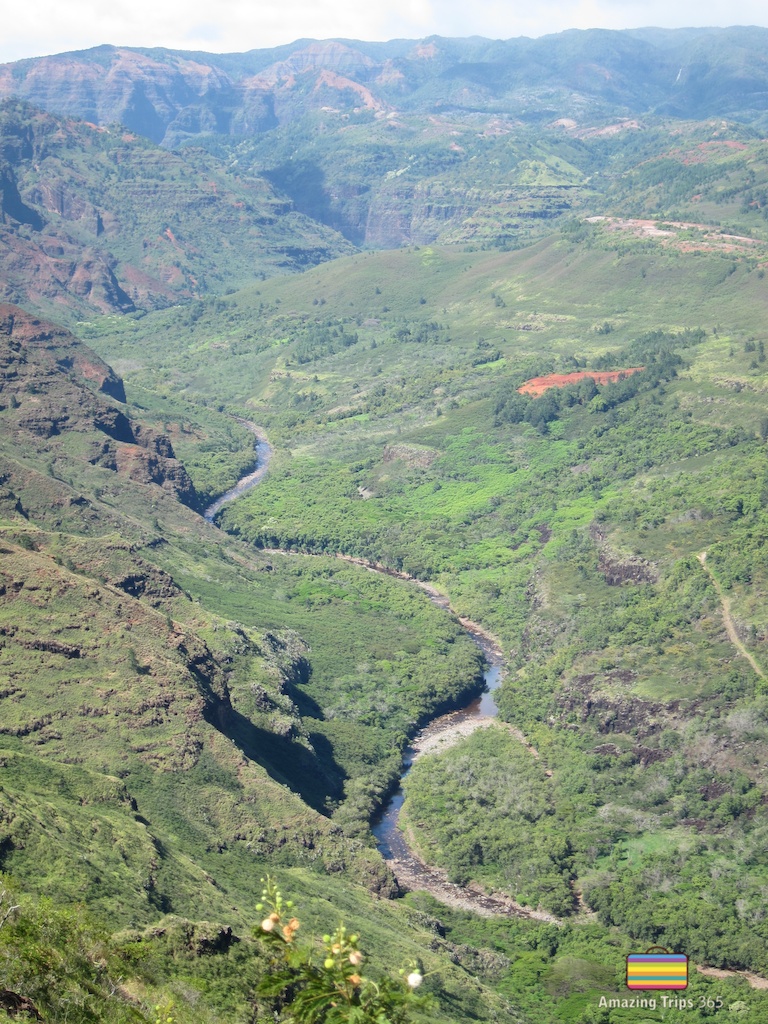 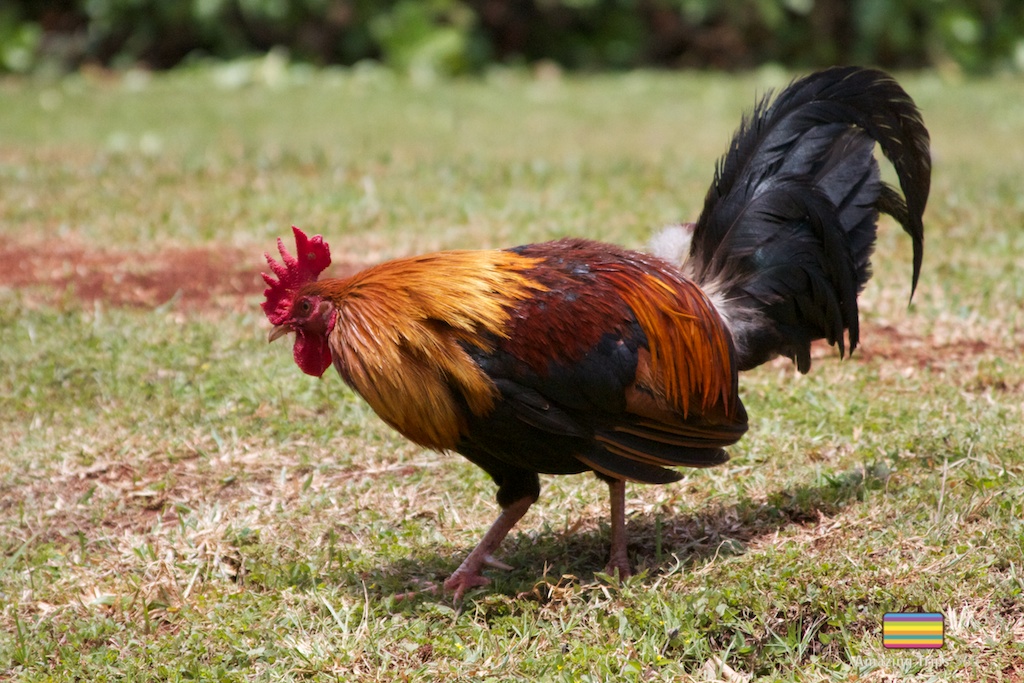 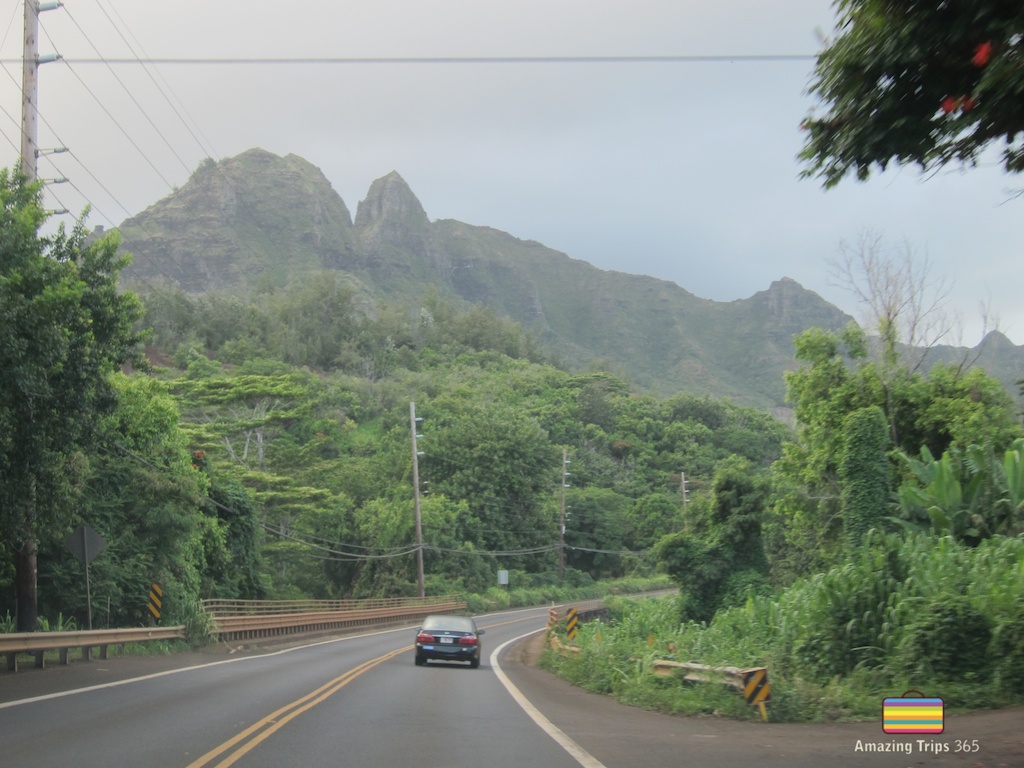