Out of the many aquariums that I have been to worldwide, I enjoyed Aquarium of the Pacific the most for its hands-on experience. Late night admissions are available for a discounted price of $12.95 after 5pm on certain weekdays. So explore the aquarium when it is not crowded with school children running around. 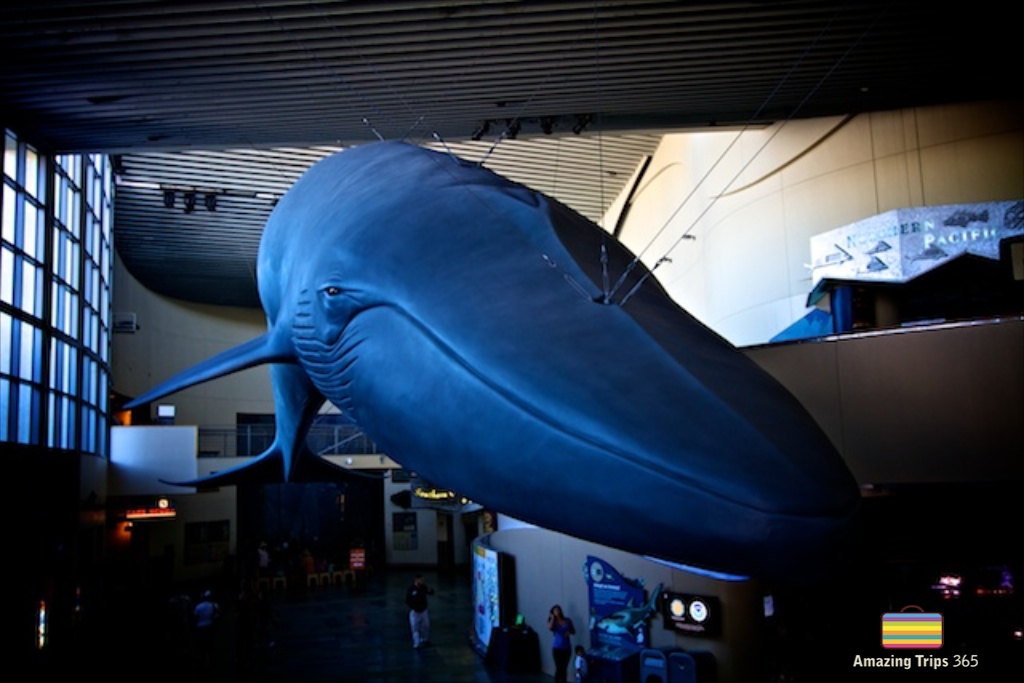 Just outside of the Lorikeet Forest, we bought a cup of agave nectar for $3. As soon as we entered the double doors, a Lorikeet flew and perched on my arm. I screamed as more Lorikeets landed on our heads and shoulders to drink their favorite nectar. These cute little colorful Australian birds were vicious and didn’t want to share. We were careful because they bite. Lorikeets are vegetarian. They eat nectar, pollen flowers, fruits, berries, and unripe grain. Tiny appendages that form a U-shape at the tip of their tongue act like bristles on a brush, making it easy to to collect pollen. 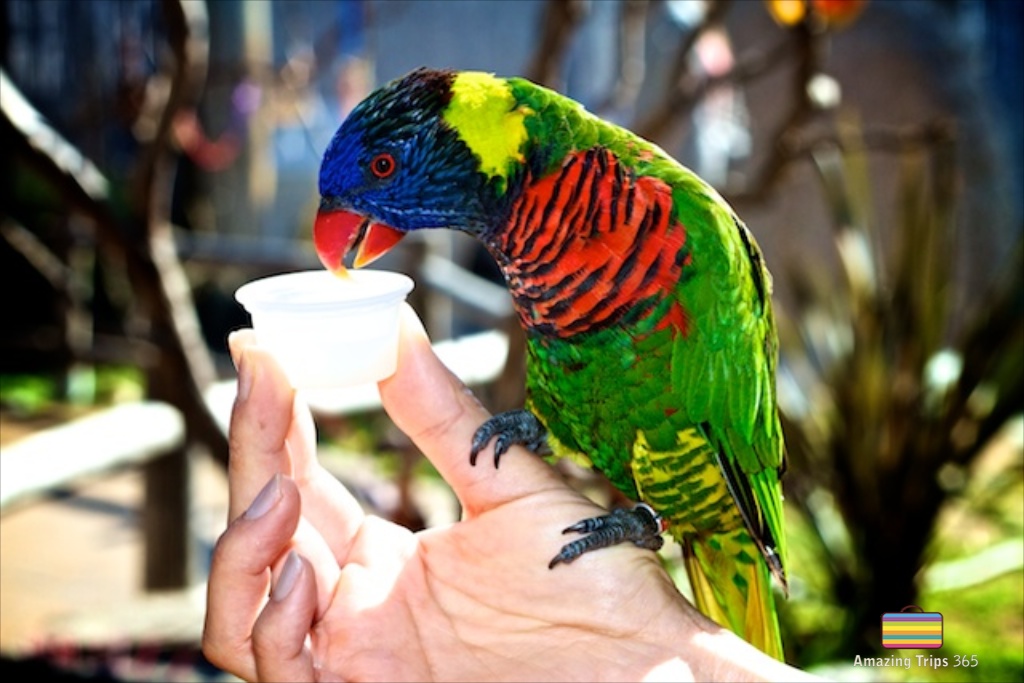 At Shark Lagoon, touch the reticulate whiptail ray, a school of white-spotted and brown-banded bamboo shark, as well as epaulette shark. The skin felt very much like leather except sharks have scales called dermal denticles that are like our teeth to protect its body. Amongst whitetip and blacktip reef sharks, zebra sharks and nurse sharks, freshwatered sawfish looked very interesting. And multiple rows of jagged teeth of sand tiger sharks immediately reminded me of the re-runs of the Shark Week shows to my mind. According to the documentary, when you see a shark in the water, it is best to swim and get out of the water as fast as you can or stay in a group. The idea is to be a threat to the sharks, not a pray. 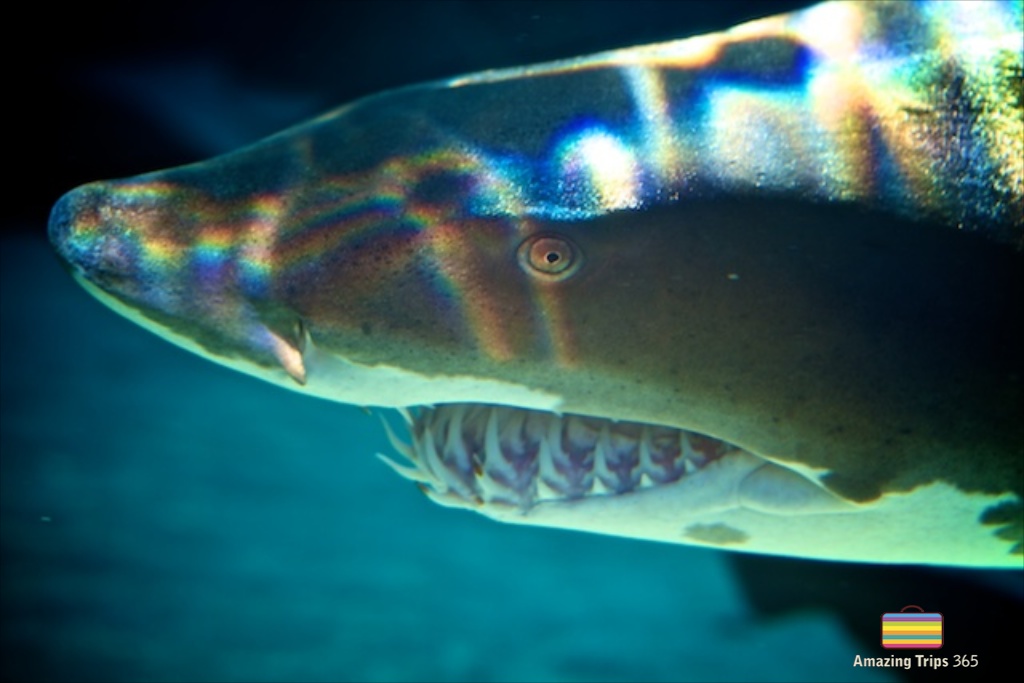 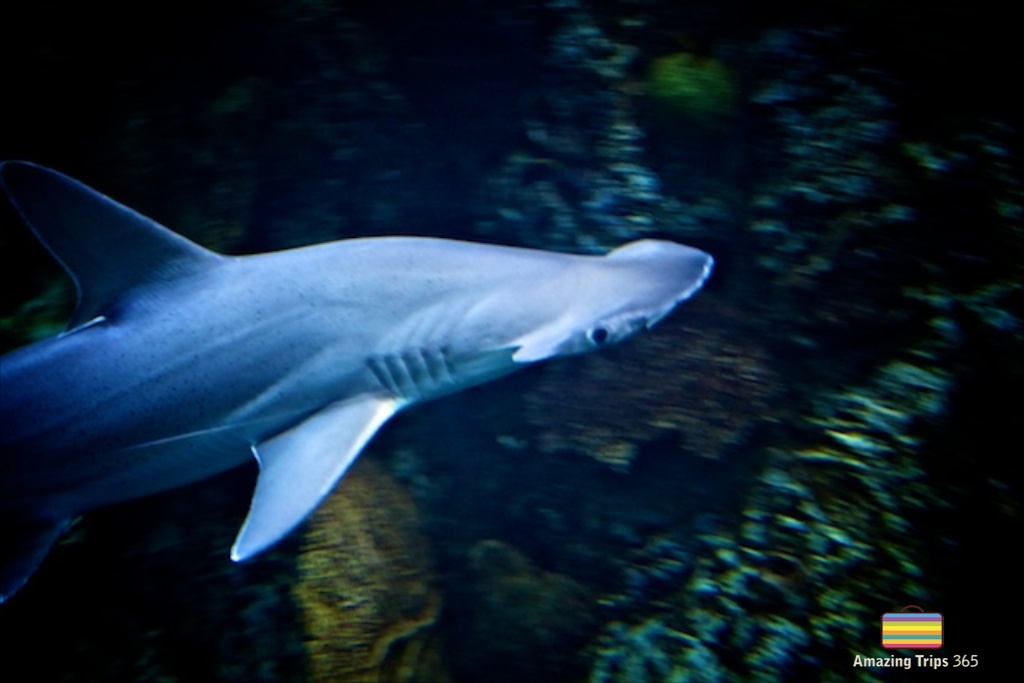 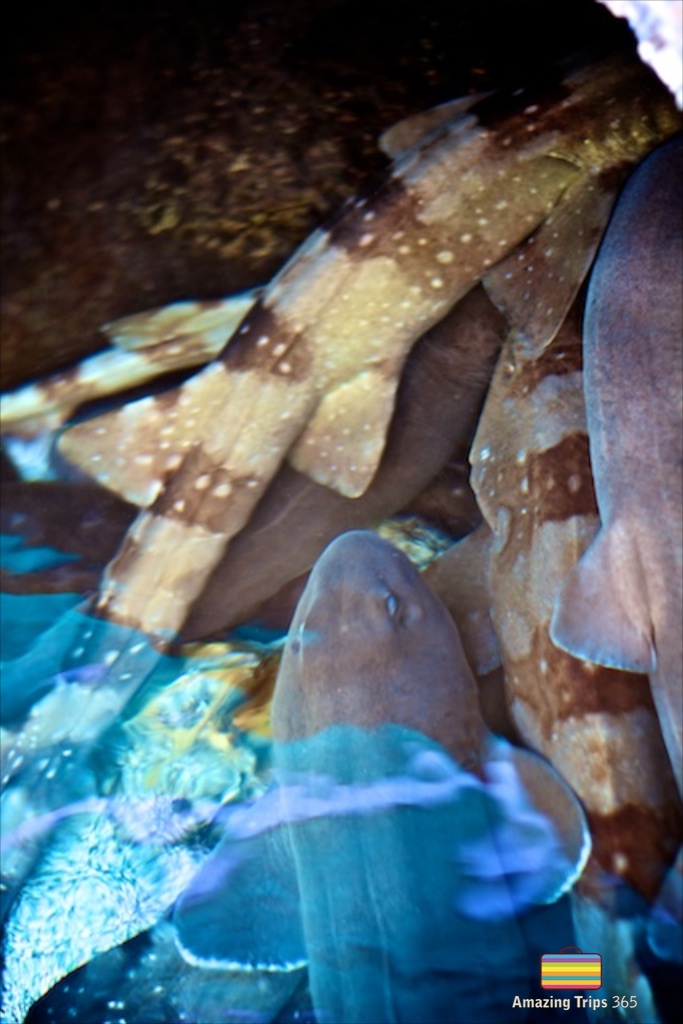 Southern California/Baja Gallery had cold-blooded California spiny lobsters that live in La Jolla Cove and in the Pacific Ocean from Monterey Bay to Mexico. They grow 12 inches in length, have a pair of enlarged antennae, and no claws. In the same area are seals and sea lions. The California sea lion and harbor seal are pinnipeds, animals that have fin-like flippers. Unlike seals, sea lions have external ear flaps and large front flippers that they use to walk and propel themselves through water. In the Channel Islands, these mammals are protected to prevent from extinction. Go for a thrill at the ray touchpool and touch one of the bat rays or shovelnose guitarfish. The triangle-shaped pectoral fins of the bat ray are often called the wings and compared to those of a bat. The Gulf of California exhibit has many peculiar kinds of fish…garden eel, mexican lookdown, balloonfish, cortez rainbow wrasse, popeye catalufa and longnose butterflyfish, to name a few.
The four species of diving birds, the horned puffin, tufted puffin, crested auklet and pigeon guillemot, live in icy waters of the Bering Sea. Also in the Northern Pacific Gallery are sea jellies. Warming ocean temperatures cause “blooms” but their abundancies negatively affect the fishermen by clogging up their nets and feeding on larval fish. 90 percent of the jellies comprise of water and have no brain, eyes, heart, or bones. Then there is a weird breed of half slug and half jelly. While diving in Honduras, I got stung by a school of jellyfish and was in pain that lasted a few days. Luckily, their spines were cut in the touchpool. What I had thought to be airy and fragile creatures turned out to be the complete opposite. Sea otters, found along the California coast from Half Moon Bay to Coal Oil Point near Santa Barbara, hunt, mate, groom, give birth, play, rest, and sleep in water as cold as 35 to 60 degrees in the kelp forests. For being the smallest of the marine mammals living and without a blubber, they eat 25-30% of the body weights each day to convert food into heat. Their high metabolisms enables an adult male to eat as much as 15 lbs. of food per day. In addition, sea otters have one of the densest fur, creating an insulating layer of air to stay warm. Therefore, grooming and keeping the undercoat dry is vital. 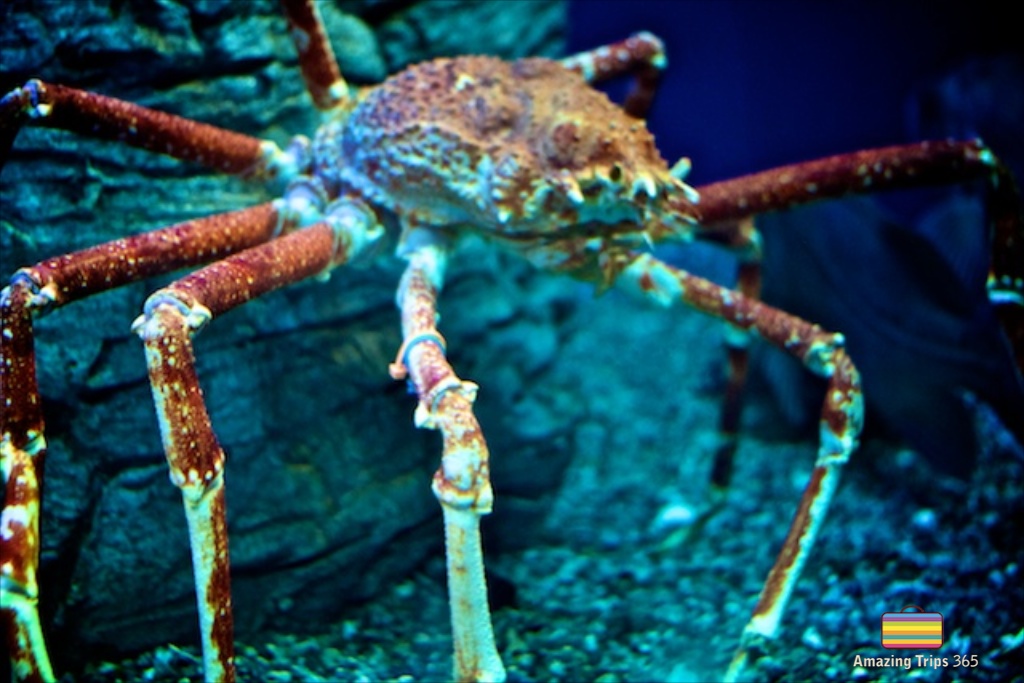 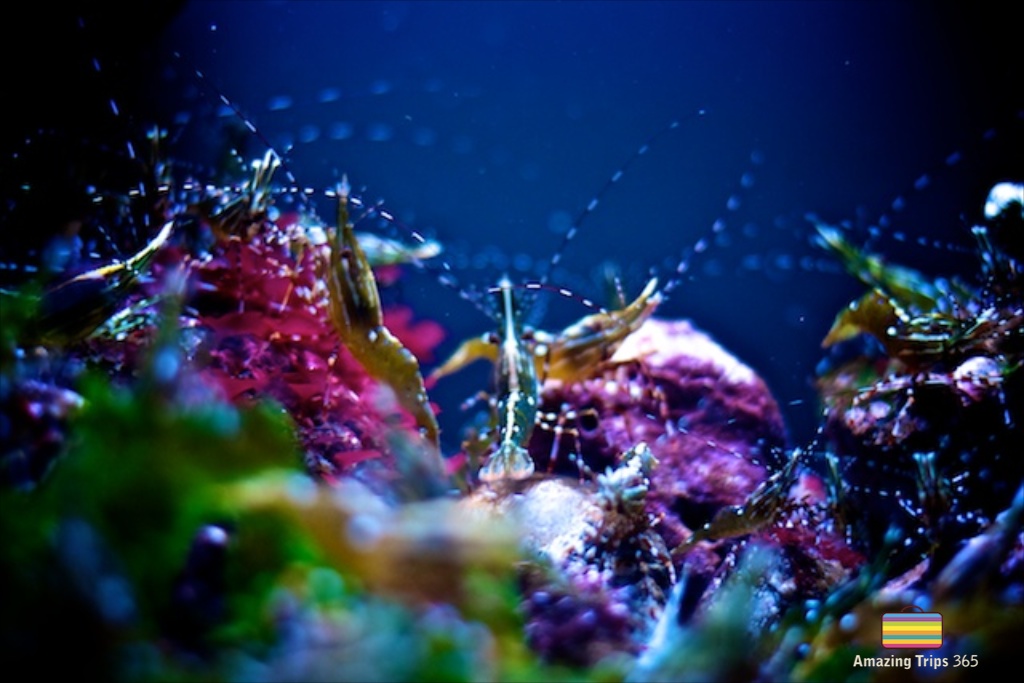 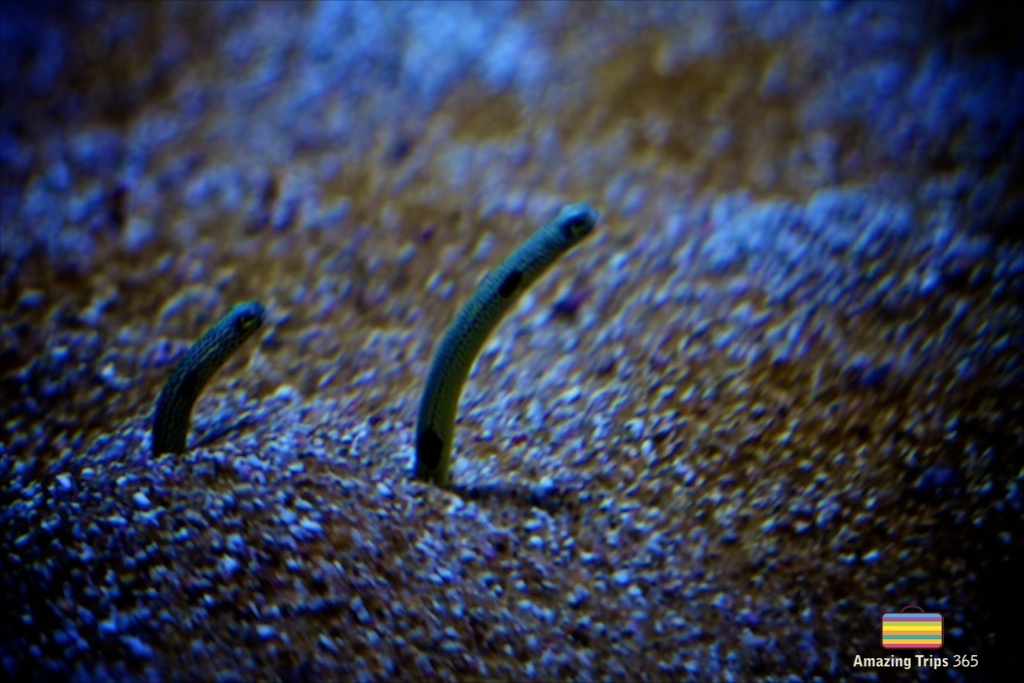 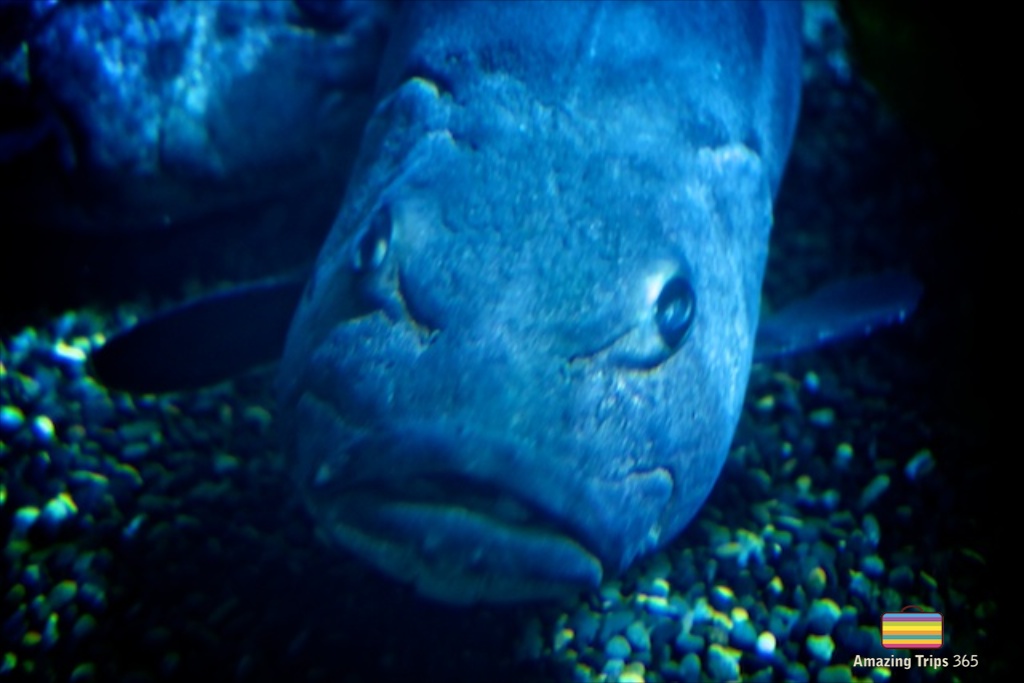 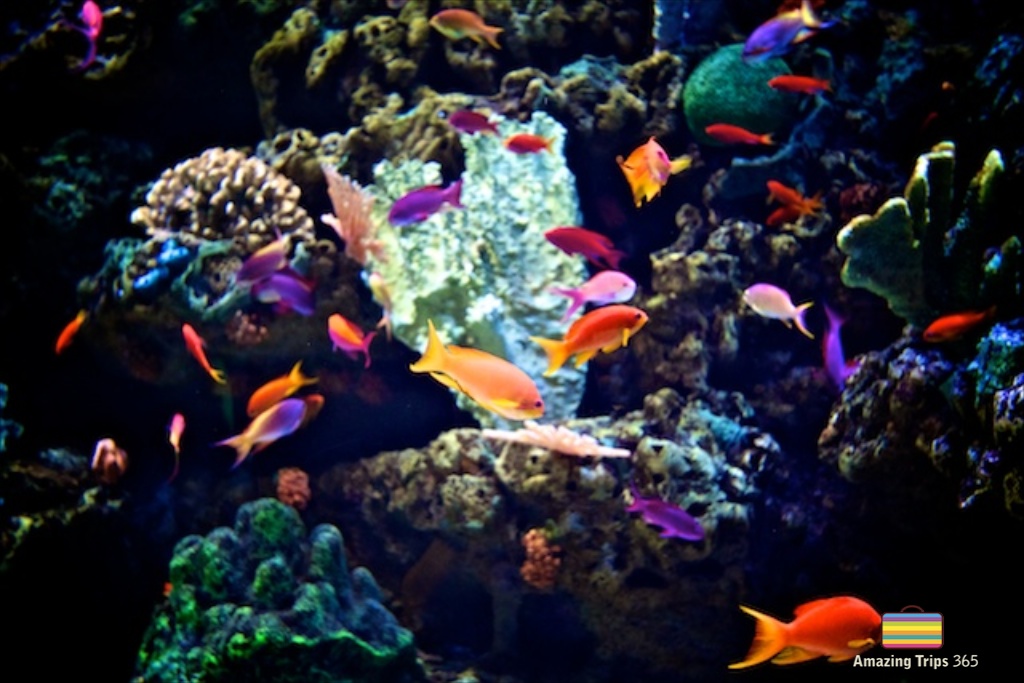 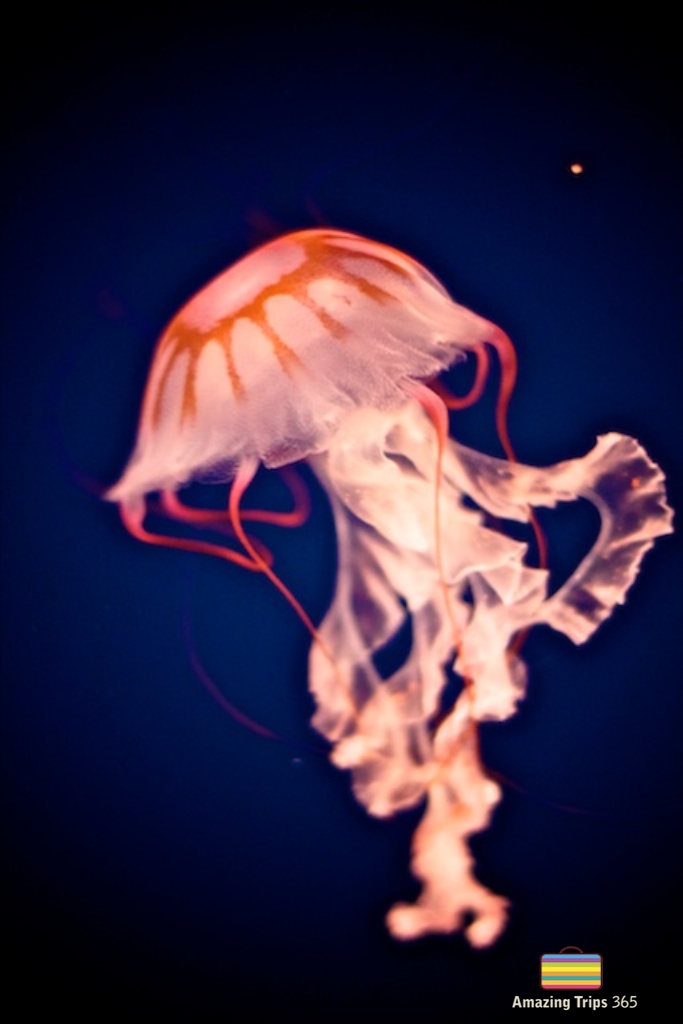 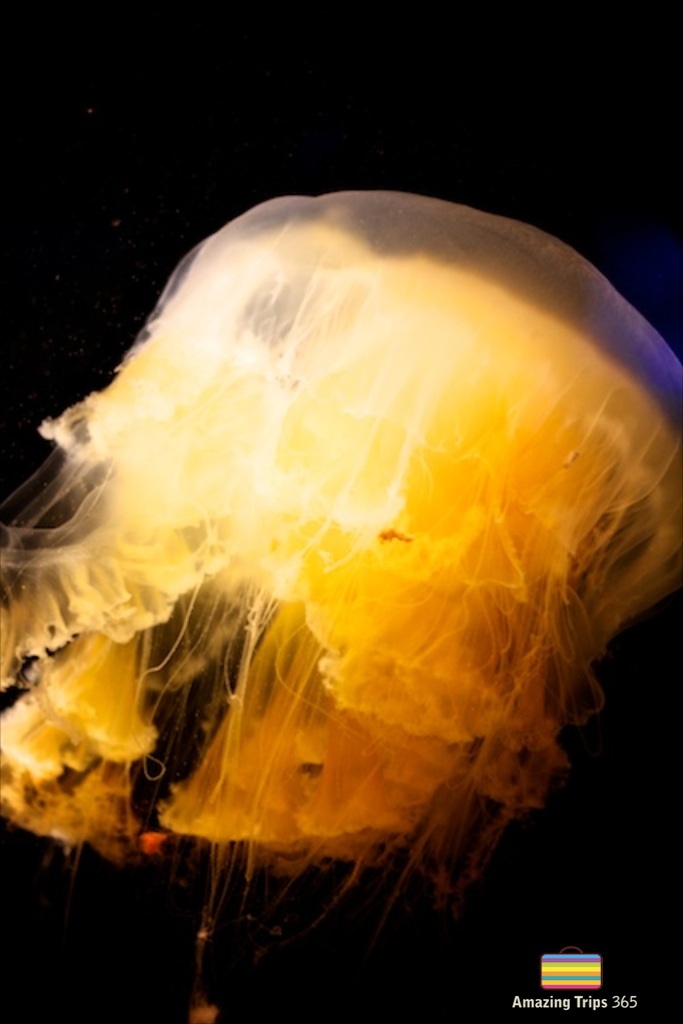 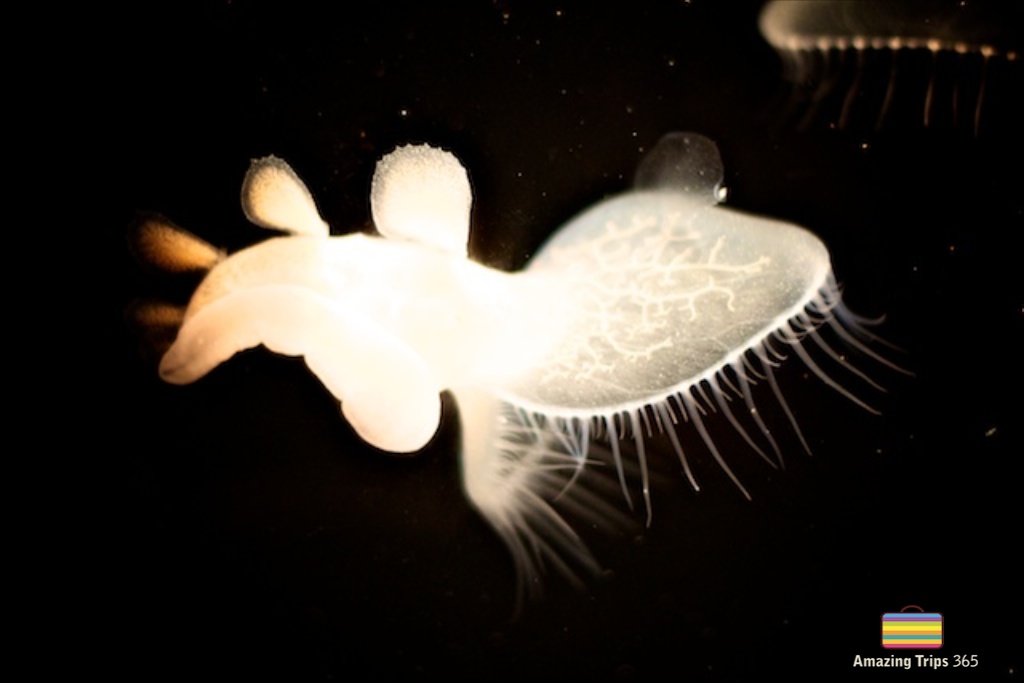 “Finding Nemo” or the clownfish, seahorses and sea turtles represent the archipelago of Palau, the western-most section of Micronesia, in the Tropical Pacific Gallery. Ambush predators such as lionfish camouflage to sneak up on prey and use their venomous spines to protect themselves. Sea dragons live in shallow waters off southern Australia’s rocky coast. They are easily frightened and fragile to changes in their habitats. Weedy seadragons look like mini dragons, gracefully floating in the water. Their wood-like tails cannot curve into spirals. However, when they are ready to mate, the tip of their tail color changes. Leafy seadragons on the other hand, blend in perfectly in seaweed beds and seagrass. Olive ridley turtles are the smallest and most numerous of the seven species. The temperature of the sand plays an important role in determining the sex of these hatchlings. Warmer temperatures produce more females, so in Florida, there are more females, whereas more males are born in North Carolina. Seaturtles dive up to the depth of 500 ft! Unique species of fish, from orangespine unicornfish, redtooth triggerfish, palette tang, and raccoon butterflyfish to cownose ray and bonnethead shark occupy the tropical reefs of the aquarium. 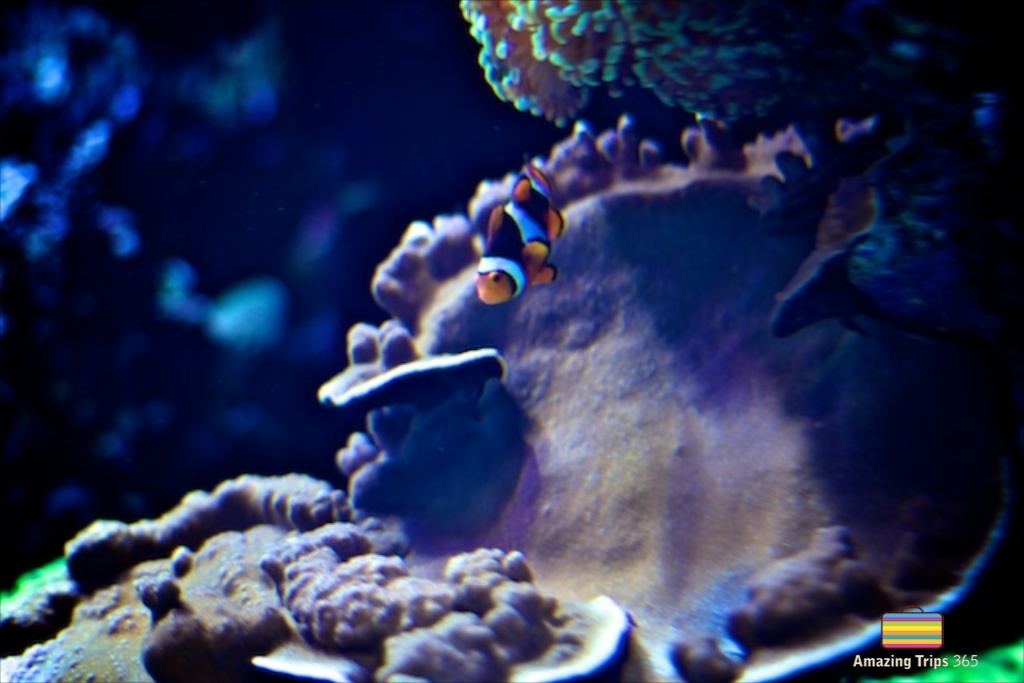 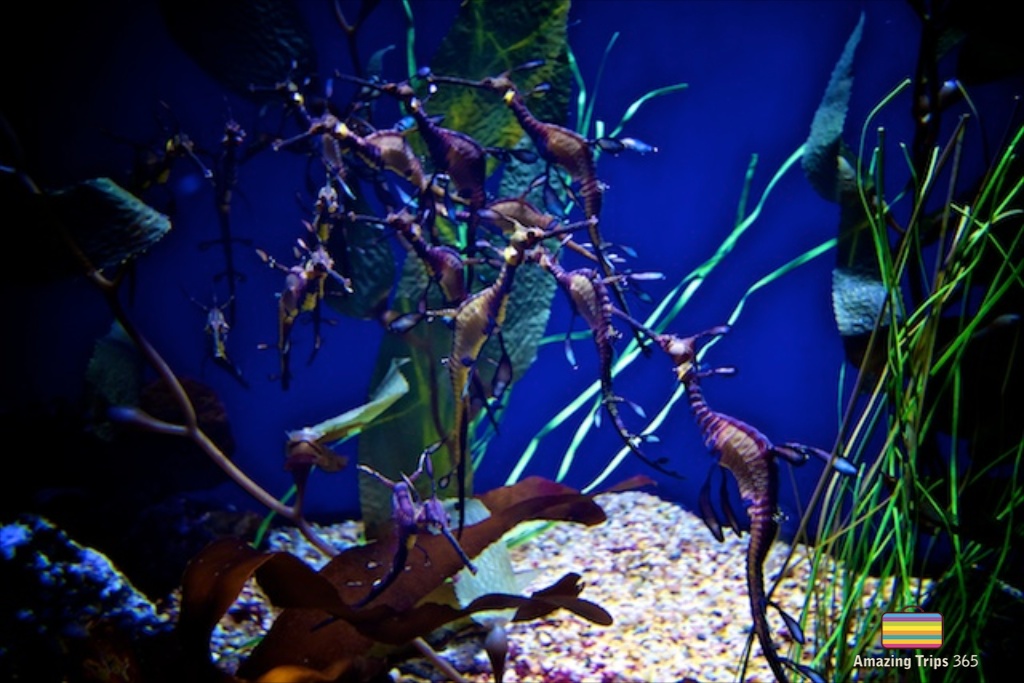 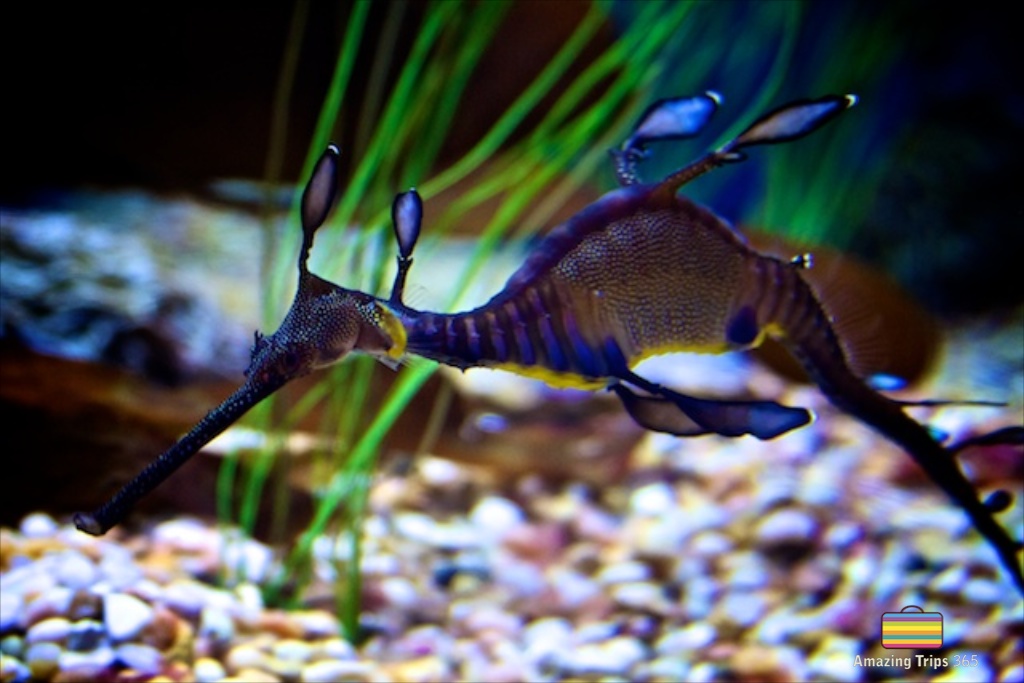 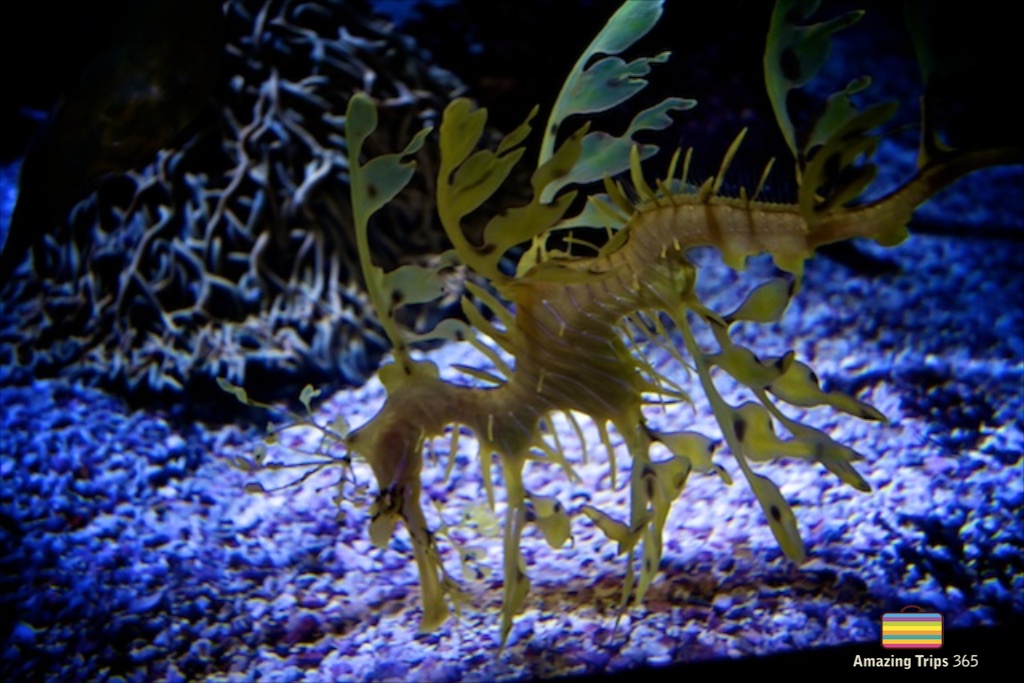 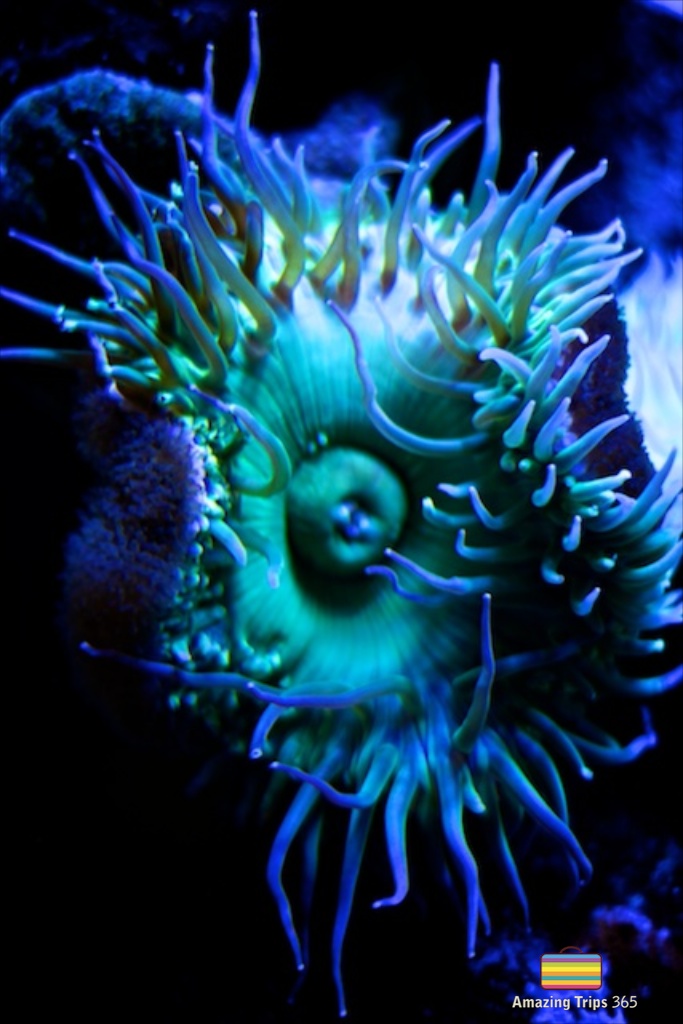 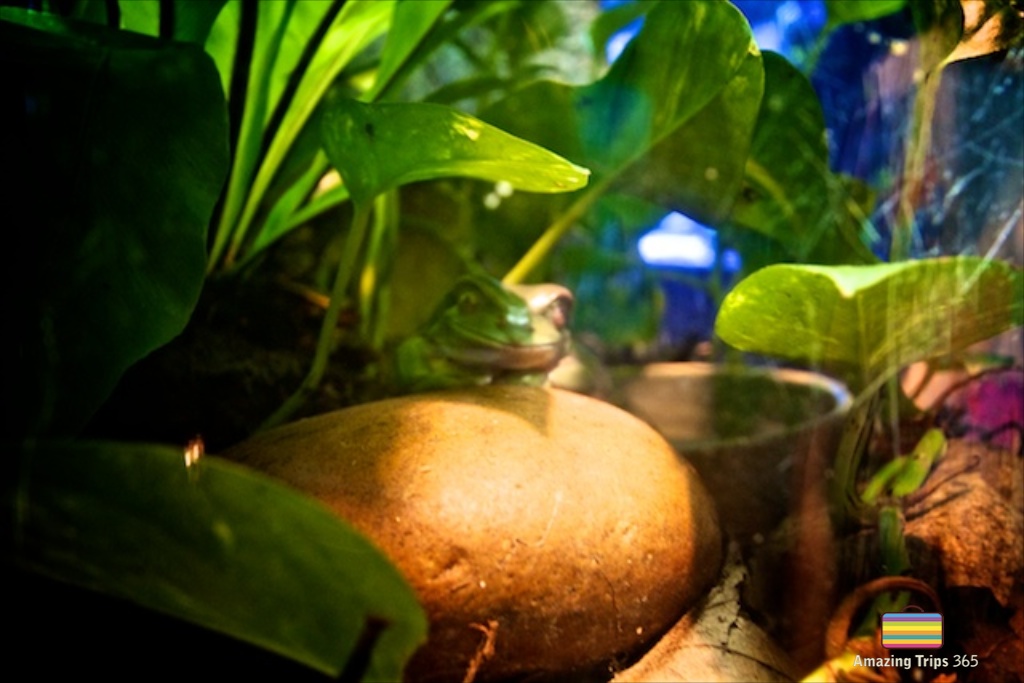 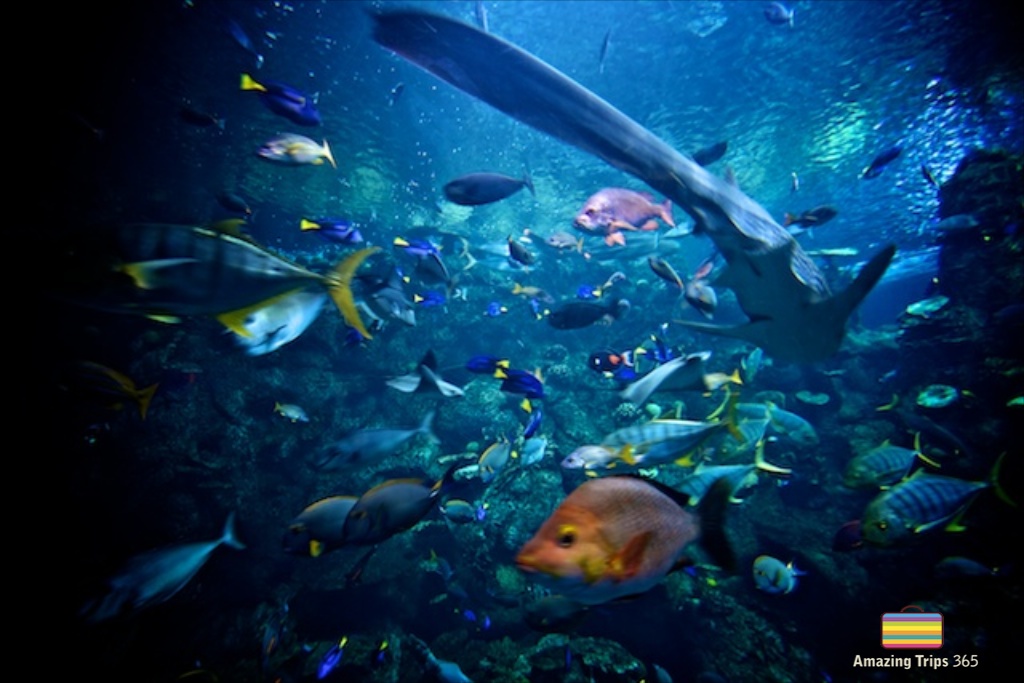 Scientists assume that by the end of this century, the sea level could rise more than three feet, meaning that San Franciso International Airport and the Ports of Los Angeles and Long Beach could be flooded. Global warming, which changes water temperatures, the acidity and the habitat for these mammals also cause a threat in their survival. I hope that you too will discover the beauty of many types of these marine species and learn ways to preserve their lives on planet earth.